With more than 1000 published studies and over 7000 published articles curcumin extract is one of the most well researched medicinal plant extracts to date and one of nature's most powerful healers. One of the active ingredient in turmeric is curcumin. Turmeric has been used for over 2500 years in India, where it is eaten daily as a common spice in the diet. When taken with some form of fat and/or pepper it will increase the bioavailability by as much as 100 fold.

Our Curcumin Extract Powder is a 95% extract (30:1 ratio) meaning each serving contains an 95% concentration of Curcuminoids.

Turmeric is a member of the curcuma botanical group which is a part of the ginger family of herbs known as zingiberaceae. On average 2-4% of curcumin is what you naturally find in turmeric in its whole root form. While turmeric has many powerful active constituents, curcumin, is the one that modern science has taken quite an interest in. It is believed and well documented that turmeric in either its standardized form with a minimum of 95% of this active ingredient or whole form (usually added to either a fat or pepper extract) is a major key in supporting optimal wellness. Much of today’s science is focused on the ability for the body to have a healthy inflammation response and its relationship to disease. This is where turmeric is believed to be of great value and the research clearly back this up 100%.

The research on curcumin shows it’s ability to support the body in multiple ways. First, it may support the body’s ability to modulate 700 different genes. As a part of that modulation process, it may support over 160 different physiological pathways. Next, by possibly supporting the body’s ability to make cell membranes more orderly, it may have a direct effect on signaling specific types of molecules. This signal reaction has shown to possibly interact directly with how cell survival proteins maintain integrity under extreme cellular distress. Curcumin’s ability to cross the blood-brain barrier has sparked much research into its ability to possibly support healthy neurological function. There are several characteristics that make this possible. It’s natural antioxidant compounds (ORAC score of 160,000) and its ability to support a healthy inflammation response, in and of itself, may support the function of a healthy brain.

Additionally, curcumin may support the body’s ability to help prevent the production of beta-amyloids. This is accomplished in several ways. It may reduce levels of pro-inflammatory signaling molecules that promote beta-amyloids. It may limit oxidation of crucial fats and proteins which trigger enzymes involved in beta amyloid formation. It may support cleanup of existing beta amyloid deposits. Because curcumin is nontoxic and does not adversely affect healthy cells; it leaves this compound open for much more research on its potential uses.

With the research showing the potential for close to 600 therapeutic effects of curcumin (according to greenmedinfo) it would only seem natural that there was proof in the pudding to support this. As a part of this research it was shown that curcumin has the potential to compete with with some of the heavy hitters in the pharmaceutical industry. A 2008 study that compared curcumin with Lipitor was published in Drugs R&D showed that curcuminoids may support the body’s ability to have healthy endothelial function equally effective as the drug. A 1999 study published in the Journal of Phytotherapy Research found similar positive results between a corticosteroid drug and curcumin. According to this study, the curcumin was found to work in a safer fashion when supporting inflammatory eye issues. Another study showed its potential as an alternative therapy to dexamethasone by possibly protecting against lung transplant injuries without the side effects. In a 2011 antidepressant study published in the, Journal of Acta Poloniae Pharmaceutica, found curcumin may have worked, equally as well as, the top drugs like prozac through supporting healthy levels of serotonin and dopamine. This study took 60 patients and divided them into 3 groups. The first one took 20 mgs of Prozac every morning. The second group took 1000 mgs of curcumin and the third group took both. Evaluations after 2, 4, and 6 weeks showed that the group which took both the prozac and curcumin had 77.8% of participants responded well to the treatment. This was compared to 62.5% for the curcumin group and 64.7% for the prozac groups alone. It was concluded that curcumin may be a good add on therapy for major depression. A 2009 study comparing metformin with curcumin published in the Journal of Biochemical and Biophysical Research Communications showed that curcumin may support the body’s ability to increase glucose uptake just as well as the metformin.

Finally, a study was done with 45 patients to evaluate curcumin to support the inflammation process associated with rheumatoid arthritis. The patients were randomly put into 3 groups. Group one received 500 mg of curcumin daily, group two received the curcumin and 50 mgs daily of the drug diclofenac, and, group three received only the drug. This study lasted 8 weeks where the patients were evaluated based on an activity score and blood work was done both before and after the 8 week period. The results of this study were quite impressive because it showed specific practical advantages of the herb over the drug. Every patient in group one stated that overall they hurt less and had significant improvement in their activity scores (group one had a 44.5% improvement, group 2 a 44.4% improvement and group 3 42.1% improvement). Group one had 93% less swelling and tenderness compared to the other groups that saw a 73% and 33% improvement. The blood marker results were in alignment with these statements as well, proving it was not just the patient’s feelings. The exciting results showed curcumin alone to be more effective than the drug alone and the drug combined with the herb. The group with the combination had no additional benefit by adding on the drug.

This is all just the tip of the iceberg! Curcumin has a very impressive track record for long term results and safety as well. Curcumin is a clear and simple choice whether being used as an extract or added to your food to possibly support optimal health.

Some possible traditional uses of 95% Curcumin Extract Powder may include:

Constituents of Curcumin Extract include:

Origin:Grown and extracted in China. Packaged with care in Florida, USA.

Curcumin powder stains everything yellow.....hands...clothes...How do I handle the stuff?????

I have only been taking it for 29 days, so far so good

D
Donald P. (Kansas City, US)
Among the Best in the World???

Amazing herb! Combine with moringa powder, lemon juice powder and piperine, inflammation doesn't stand a chance. In addition to that, cognition, and smoother even tone skin is another noticeable benefit.

The quality of this product is very good, the direct attributes of turmeric to get at joint pain cure and helping fluid motion. 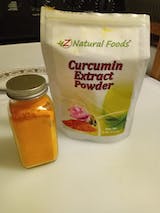 Share your personal link to your friends and welcome them with rewards. Claim yours when they make their first purchase. Curcumin powder stains everything yellow.....hands...clothes...How do I handle the stuff?????

I have only been taking it for 29 days, so far so good

D
Donald P. (Kansas City, US)
Among the Best in the World???

Amazing herb! Combine with moringa powder, lemon juice powder and piperine, inflammation doesn't stand a chance. In addition to that, cognition, and smoother even tone skin is another noticeable benefit.

The quality of this product is very good, the direct attributes of turmeric to get at joint pain cure and helping fluid motion.